DARKFIELD illumination consists of cutting off or blocking out the central rays of light and directing the peripheral rays against the microscopic objects from the sides. Only those rays which strike the objects are reflected upwards to pass through the objective to the eye-piece. The object thus appears bright upon a dark background. Darkfield examination is of great value in the detection of spirochetes in the living condition. It is the only certain method of diagnosing syphilis in its very early stage since the presence of Treponema pallidum in the primary sore is the cardinal evidence of syphilitic infection. It is very easy of application and it can be done in a short time on an ordinary bacteriological microscope with a darkfield condenser. The technique is simple and can be mastered in a few weeks but for success several precautions have to be taken. Results of this examination are very encouraging (The Medical Bulletin, Vol. viii, 2, 40).

Source of light should be on the same level as the substage mirror. It should not be either far off or too near the microscope, but it should be kept at such a distance that it will give an uniform and powerful illumination. This distance between the lamp and the mirror can be decided by using a slip of white paper on the mirror (when one gets a good image of the lamp on the piece of paper) and also by illuminating the condenser by means of the mirror when one gets a bright ring on the surface of the condenser. This distance is about twelve inches. 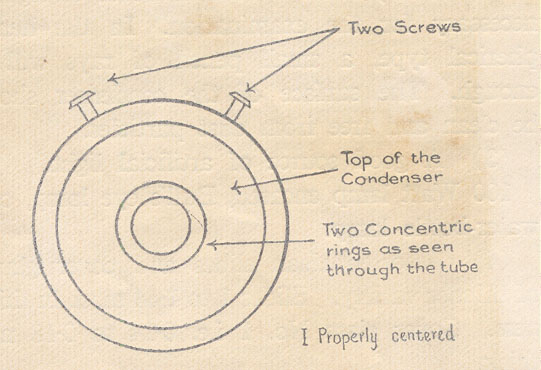 Collection of material from the venereal sore.

The suspected sore is rubbed clean with a gauze soaked in normal saline. If the sore has been previously dressed with some antiseptic, the dressing should be changed to normal saline and the examination of the exudates for spirochetes be undertaken after some days. Cleaning the ulcer and the surrounding area very well, the base of the ulcer is grasped in the two fingers of the left hand and it is firmly and continuously pressed between them. Serum usually flows out. If the ulcer bleeds it has to be mopped out once or twice and then the serum will begin to ooze out. In some cases it may be necessary to scrap the ulcer. If the ulcer is healed the aspiration of a small quantity of serum from the base of the old ulcer or a small quantity of lymph from the associated enlarged lymph node should give satisfactory results. Previous injection of a little normal saline at the site of aspiration and massage afterwards will make the aspiration easier. It has to be remembered that the ulcer should be as clean as possible, that it should not have been treated with anything but normal saline and that the spirochetes predominate at the margin of the ulcer. Hence the serous exudate squeezed out from the edge of such an ulcer gives the best chances of a positive result. The material should be examined preferably immediately or may be collected in a capillary tube, sealed in and then sent for further examination. “As a precaution against accident rubber gloves should always be worn while handling the syphilitic lesions.” 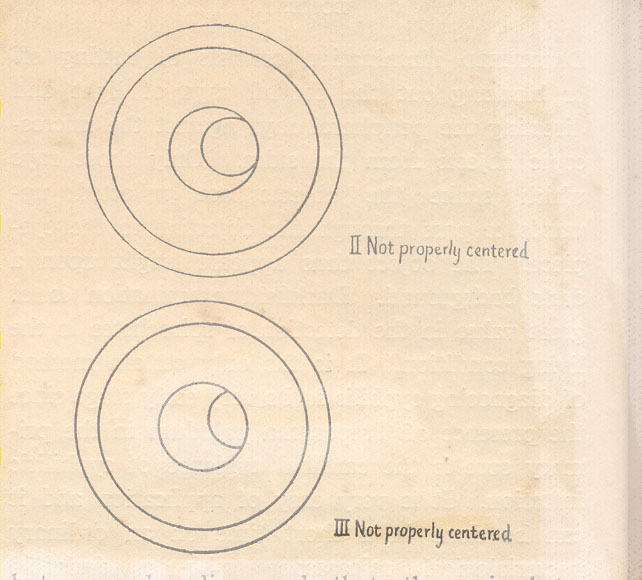 A drop of serum to be examined is placed on the centre of the slide. If the serum is very little a drop of normal saline is added to it. The drop should not be very large but should be just sufficient to form a thin and unbroken film under the coverslip which is placed gently on the drop and slightly pressed upon. A cornet forceps can be used to hold the coverslips. Air bubbles in the film are well avoided by gentle maneuver. If the examination is delayed or prolonged a little vaseline applied to the borders of the coverslip prevents the specimen from drying.

A drop of cedar-wood oil or distilled water is placed on the top of the condenser which is already raised up, cleaned and centered. It is then rocked down gently. The prepared slide is placed in position on the microscope stage and the condenser is raised up again till the drop on its top comes in touch with the under surface of the slide and becomes flattened out. Air bubbles are again to be avoided. Focus with the lower-power objective on, and by moving the condenser up and down till a bright patch is seen in the field; this patch is made to appear smallest and brightest and is then brought to the centre of the field. Now the low powered ocular has to be replaced by the high powered one, and the low-powered objective by the dry high power objective or by an oil immersion lens with a central stop. With the oil immersion lens oil has to be used on the coverslip. Dry high power lens does not need oil. Careful focusing is done till the objects appear. It may be necessary to make final and finer adjustments in the condenser, mirror and in the focusing to obtain an uniform dark background with brightly illuminated organisms in the field.

To trace the course of the rays of light:- The rays of light from the sub-stage mirror, while passing through the condenser, are either diverted obliquely or their central portion is cut off and only the peripheral rays are allowed to proceed according to the type of the condenser used. Then they pass through the film of oil or water on the condenser, through the slide to the film of serum where they are brought to a focus. Their further course depends upon what they strike. The rays which strike r. b. c. s or organisms which have different refractive indices are naturally sent up more vertically through the coverslip, the objective and the tube of the microscope to the eye-piece and the eye of the examiner. On the other hand the rays which strike serum i.e. liquid pass practically without changing their direction and thus do not reach the eye of the observer.

Success in the dark field examination wholly depends on carefully following the small details. Slight maladjustment or impatience is likely mar otherwise good result. It should be a rule to spend a few minutes in the proper adjustment of the instrument before every examination. Focusing through a bit difficult (for one has to focus both the condenser and the microscope at the same time) can be learnt by constant practice. To get practice one can try examining slides of spirochetes from the mouth or Condylomata. To be able to give correct and definite opinion about the type of the spirochete, one should get accustomed to the same magnification and to a particular microscope.

Spirochete pallida was discovered by Fritz Schaudinn and E. Hoffmann in 1905. It was afterwards named Treponema pallidum. It is slender, spiral, motile and tapering at both ends. Its length is 8 to 12µ on average and its thickness 0.25µ. Its spirals are regular, closely twisted, a µ deep and number from 8 to 12. They remain unchanged during activity or rest. The organism has low vitality and cannot resist drying or even weak antiseptics. It has a dead-white look and its appearance and movements are diagnostic.

I am thankful to Drs. W. N. Welinkar, J. N. Parmanand and P.V. Gharpure for their ever willing help, guidance and encouragement.