ATTITUDES TO V.D. AND FACTS AND FALLACIES 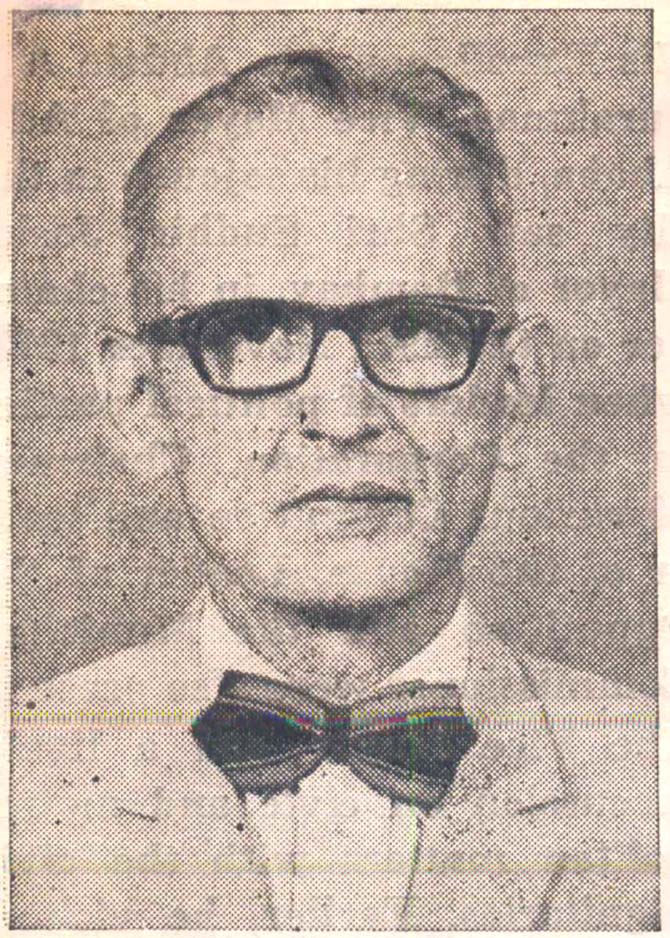 Sir William Oster, a militant crusader against venereal diseases once spoke of them as “the most formidable enemy of the human race, entrenched behind the strongest human emotions and deepest of prejudices. They are related to the sex life of a man, shrouded in reticence and secrecy, treated by silence, concealment and taboo.”

Venereal diseases are saturated and diffused with prejudice and ignorance and provoke divergent views among the public. Few people are really interested in V.D. and there is widespread ignorance and deep prejudice. Our attitudes to V.D. are entirely prejudiced by attitudes to illicit sexual intercourse. There is always a tacit assumption that normal code of sexual behaviour must have been broken. This is the genesis of the unpleasant connotation attached to V.D. In the minds of the public, there is always a compassion and deep concern for the patient with typhoid or tuberculosis but severe condemnation for the patient with venereal disease. No wonder that V.D. makes no appeal for charity and few can hope to raise funds for the project involving V.D. It is sad to know that ignorance and prejudice concerning V.D. are to be found even within the medical profession as well outside it. Medical man’s knowledge of V.D. varies greatly according to the medical school where he happens to study the subject and the time he spends in learning and training in that subject. Usually a few hours spread over a few weeks are allotted for the study of V.D., the world’s third most prevalent infectious disease. Hence medical man’s knowledge about V.D. is in direct proportion to the amount of time spent in studying the subject. Underestimation of its importance is the rule and inadequate and marginal knowledge is quite common. Imperative need for the individual practitioner in medicine to have adequate knowledge of these common diseases is totally overlooked. Most of us know that venereal diseases are generally transmitted through sexual intercourse either illicit or licit and the incidence of asexually transmitted V.D. is extremely small. Yet it is common to come across some persons even among the medical and nursing profession as in the public, who fancy that V.D. is acquired by entering the V.D. clinic, shaking hands with the venereologists, use of public urinals or latrines, cycling or weight lifting. Again most people regard a patient with V.D. as promiscuous and a less worthy soul deserving no consideration. This careless attitude towards V.D. and the subject of venereology is to be found even within the medical profession, and too long the subject has traditionally been with the inferior and less gifted medicos. Outside venereology, the medical profession has among its highest ranks a few who regard venereology as unworthy of special study and many who remain totally ignorant or unaware of the diversity of its interest, wide horizon, complexities and involvement. No wonder there are but few recruits for the speciality and few who would like to be called venereologists. Most of them lack courage and conviction.

Inside a venereal department, there should be no indecent language or ribaldry, no hilarity at the patient’s expense, and no contempt. Observance of secrecy, respect for confidence and privacy are precious for such trivialities. Importance of reporting sick early, need for early diagnosis and treatment, avoiding infecting others, co-operation in contact tracing etc. are better understood. Careful physical examination, precise diagnosis and its confrmation by laboratory tests, proper and adequate treatment, and follow-up tests of cure are never neglected. V.D. is no longer a penalty for those who know about it. It is not a deterrent against the risks of exposure to infection. It remains a grave hidden menace to the ignorant and indifferent. Venereologists neither judge nor accuse their patients through a word of advice to the young and occasional rebuke for one who infects his spouse or wife, inspite of the warning may come forth occasionally. His chief concern is for the civilized and responsible approach to the subject of sex, its knowledge and implications, i.e. unwanted pregnancy and venereal disease. A close co-operation between the laboratory worker and the clinician, and efficient quick laboratory service are always present. Patient’s co-operation and trust are rarely denied. All these attributes are found in an ideal clinic, most of our clinics do not fit in.

Today’s youth, free from family influence, has an altered moral code and instinctive curiosity and belongs to the permissive group. His natural urge is for fun-sex or love-sex. His slogan is “Teenagers of the world, unite for a sexual bonanza; you have nothing to lose except your orgasm. But an orgasm a day does not keep the doctor away”. He is inclined to regard V.D. as an accident of sexual activity. Some deal with it rapidly and efficiently and then forget it; while others are content with relief of their symptoms. The permissiveness is charged with emotions and it is difficult to know what ones attitude should be. Excessive virtue as the goal of a puritanical outlook is undesirable and unattainable; so also extremes of debauchery or moral degradation are unbearable. One would like to dislike parental tyranny and welcome reduction in sexual hypocrisy. But moderation born of tolerance seems to have been carried to excess and in its wake is the steep rise in the incidence of V.D. ever known as a phenomenon for peace-time. As the result of the pill and the loop, there has been a vast increase in premarital, extramarital and promiscuous sexual intercourse and obvious and pronounced sexual emancipation in the female sex; this is evident from the increasing female contribution to the incidence of V.D. The sexually permissive section of society shows little but ignorance, indifference or contempt for venereal diseases. They do not know that a pill or a loop does not protect a person against V.D. What would be one’s reaction when a wife’s fun-sex becomes reprosex by miscalculation and independent of her husband or she becomes infected with venereal disease, or a girl’s fun-sex results in V.D? The bulk of the female patients are secondary contacts and not necessarily promiscuous. Pregnancy and venereal diseases are inherent sequelae of promiscuity. Whatever one’s conscience concerning sexual indulgence, the consequences are the same. Promiscuity is the sine qua non of V.D. but it affects the few. There will be decrease in promiscuity only when a permissive society will decide where the definite line is to be drawn. It takes three, not two, to provide one case of V.D. and only one of these need to be promiscuous. A married man may have only one extramarital sexual contact in his life, but if the girl is promiscuous the man pays for his indulgence by contracting the disease and by passing it on to his wife. Though sexual promiscuity is the basis of the V.D. problem, the repercussions extend to involve anyone who roams beyond the bounds of regular stable partnership. The chief aspect of a permissive society as affects venereologists is that more women offer themselves for intercourse. May be it is a tolerant society; for a minority, it is a licentious and vicious society. Few would willingly approve of extramarital liaisons inside a marriage. Yet many are quick to disapprove of intercourse between an otherwise holy relationship between two unmarried people desperately in love.

Another concept of venereal diseases has two sides, which are worthy of consideration. Indirectly through love sexual intercourse- being the gratification of man’s basic procreative instinct- is capable of his noblest thoughts, aspirations, achievements and conducive to his greatest happiness. Herein sex is one of the most important forms of activity known to man for elevation of mood and maintaining a sense of well-being and contributing to a good meaningful life. Nevertheless, when it leads to unwanted pregnancies or results in venereal diseases as the result of profligate sex, it gives rise to moral viciousness, remorse, loss of self esteem, loss of mutual respect, extreme degradation and domestic unhappiness. Thus on one side of the coin are Victorian prudery, fear, contempt and abhorrence and on the other side are hilarity, ribaldry and laughter.

The attitude of the venereal patient is coloured by the public attitude as a whole. For many there is bewilderment and a sense of shame. Threats of reprisal are less common. Diagnosis is accepted in calmness and philosophically. There is understanding and forgiveness. Importance of early diagnosis and treatment and avoidance of infecting others are better understood. On the other hand, the “Once bitten twice shy” attitude which was seen in the past, is disappearing fast and almost defunct. Some pretend to be Don Juans. A few patients know they are cured rapidly and gladly accept repeated attacks. Others do not attend clinics at all but go on transmitting their infections to others with gay abandonment, till overcome by some serious complication or disability. Married patients fear domestic troubles. They are profoundly concerned about their wives’ or husbands’ reaction, should they find out. Guilt and remorse are common.

Educational programme should be directed towards civilization and citizenship and adult-hood rather than adultery. An appeal should be made to idealism of youth, personal pride, self-esteem, and responsibility. Love should not be confused with lust. It is no use harping on sin rather do it on stupidity. They must be made aware of the dire consequences of catching venereal diseases, domestic and mental distress that results from reckless or licentious sex. Some young can be trusted to look after themselves as they are mentally and emotionally ahead of their times. But let us pity the ignorant youngster who finds herself with unwanted pregnancy or venereal disease and condemn the man who exploits her in awareness of what he is doing. With less inhibited approach to sexual matters, it would not be difficult to abolish absurd taboos, baseless fears, sexual anxieties and neurosis. But this new understanding and tolerance of their human problem must not land us in trouble but in a helpful aspect personal intimacy.

Ultimately we are all involved. One should not point out an accusing finger at the younger generation who have the great disadvantage of having us as parents. Rather one should point to the controller of the mass media of communication, radio and T.V. in whose power lies the future sanity and sanctity of mankind and human happiness. But they need to be awakened from slumber.

SOME MISCONCEPTIONS ABOUT V.D. ARE: -

V.D. is a curse or punishment. It is incurable. It is acquired by using public urinals and latrines, sharing the room, food or drink with the person who has V.D. It develops always as the result of illicit sexual relations. It is one disease. It has always manifestations on the body. It is often acquired by going to prostitutes. It can be diagnosed by naked eye examination and treated by unqualified practitioners. It can be cured by having sexual intercourse with young ones or animals. It affects only the adults. It is present in the poor and uneducated. A patient with V.D. is promiscuous. The prostitute is the sole vector of these diseases. Punitive measures against the infected with V.D. help to reduce the incidence of V.D. A loop or pill protects against V.D.

They should be clearly and widely known.